This is the beginning of the story of Asbjørn Hallvardsen Raae (Raa, Roe, Rowe) and his descendants. Asbjørn, his wife Ragnhild Andersdtr Raae and their two children, Anders and Anna left Norway in 1852 and came to America and Wisconsin. By 1860, according to the Federal Census, they were living in Portage Co. where Asbjørn and Ragnhild lived the rest of their lives.

Asbjørn's father, Hallvard Olsson Raa, was greatly influenced by Hans Nielsen Hauge, a traveling preacher who disagreed with the Church of Norway and espoused a simpler, pietistic Christianity. Asbjørn apparently followed in his father's footsteps for he too was a lay preacher both in Norway and in Wisconsin. I have included copies of letters written by Asbjørn to his Anders, after Anders had moved to Minnesota (with a rough translation) which vividly illustrate his beliefs.

Please inform me of errors, additions, better translations, etc., so that this can be given to our descendants as correctly as possible.

Maps of Norway with Counties and Towns 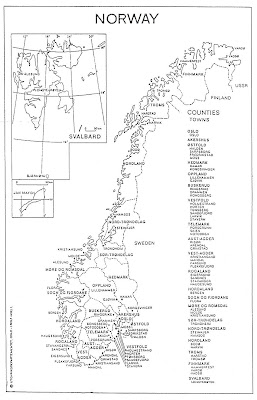 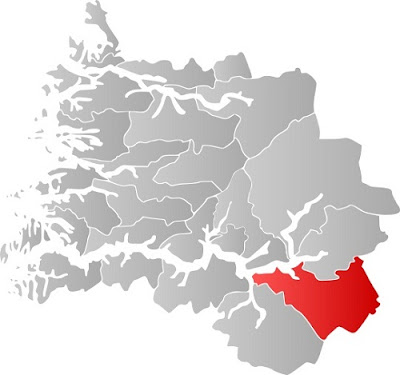 Position of Lærdal kommune within the county of Sogn og Fjordane. Image courtesy of Wikipedia. 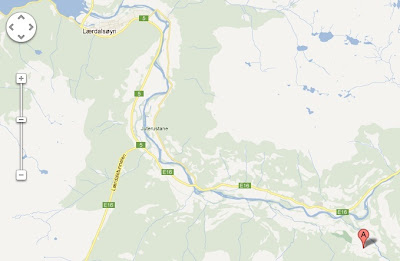 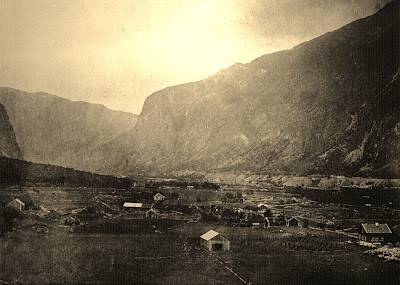 During Vincent Williams' 1986 sabbatical Vince and Verla met her distant cousin Ingebrigt Rå who currently farms on the Rå farm near Lærdal. He had a picture hanging on his wall of the farm in 1905. The above image is Vince's picture of the picture. This same image can be found in the Lærdal Bygdebok II (Espe 1990: 347). 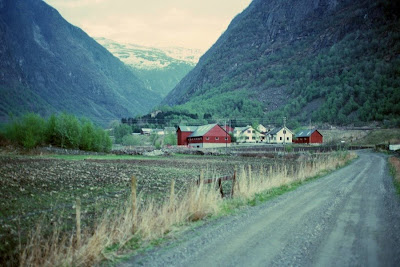 Vincent and Verla Williams traveled to Norway in 1975 with Verla's sister, Sharon, and her husband, Dalen Asche. They also were there in 1986 during Vince's sabbatical as mentioned above. During both trips they visited Lærdal and the Rå farm. 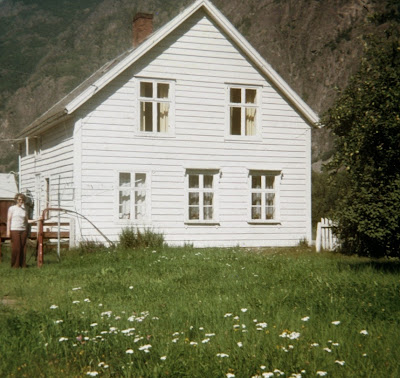 Sharon Asche by a house at the Rå farm (1975). Image courtesy of Verla Williams. 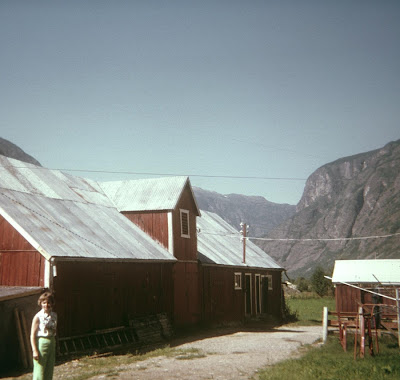 Verla Williams in front of a barn at the Rå farm (1975). Image courtesy of Vince Williams. 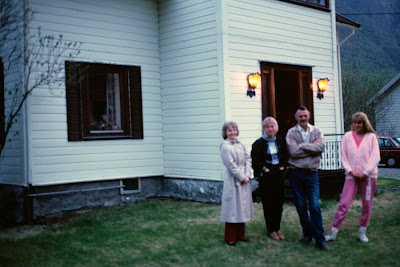 Verla and Jené Williams, Ingebrigt and Tove Rå in front of their home (9 May 1986). Photograph by Vincent Williams.
Posted by Mark D. Williams at 12:38 PM 1 comment: 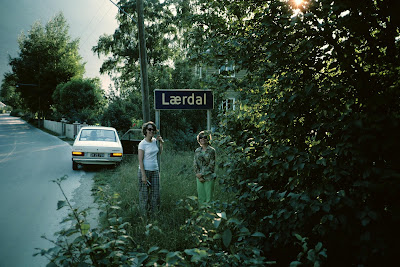 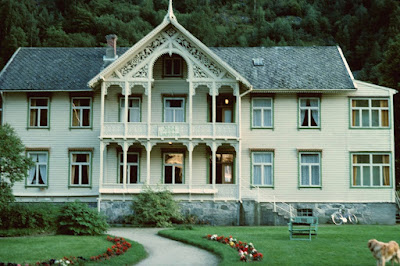 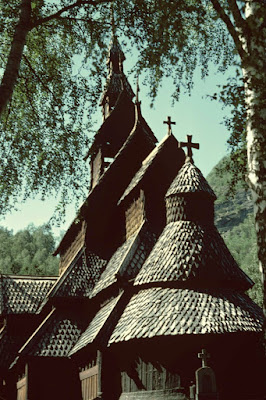 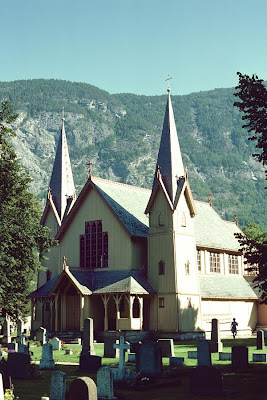 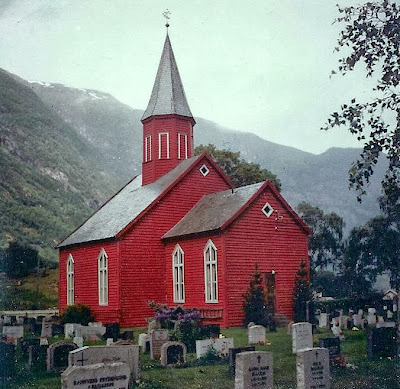 Tønjum Church, rear view. Image courtesy of Verla Williams. The Raae family belonged to this church situated between Lærdal and Borgund.
Posted by Mark D. Williams at 11:30 PM No comments:

This 1914 postcard shows a picture of the Borgund Hotel in Lærdal. Interestingly it is addressed to Gustav Johnson, my paternal grandmother's father. 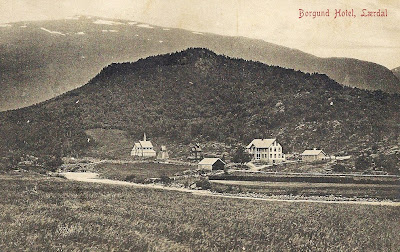 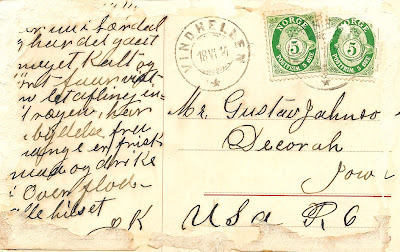 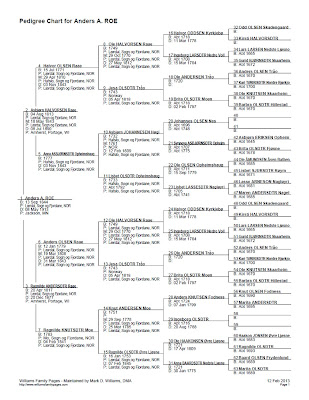 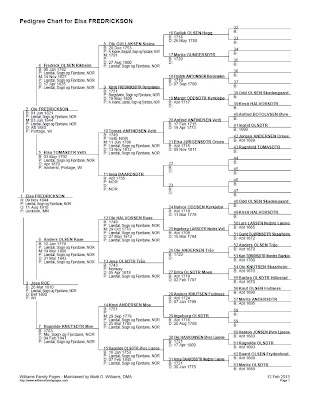 We can be reasonably sure of Anders ROE's paternal line going back six generations from the Roe (Raae, Raa, Rå) and Kyrkjebø farm family histories. His earliest ancestor that we have documented was probably named Odd Olsen Skadengaard.

We can guess that Odd's father's name was probably Ole since that was what he named his oldest son. In his article describing Norwegian naming practices, author John Føllesdal wrote:

Until I find time for more translation, we're left with the mystery of the actual connection between Skadengaard and Kyrkjebø or why and when Odd and his family moved to the latter farm. But we do know that his oldest son, Ole, received the Kyrkjebø farm (Førsund, 237), and that according to both of the Rå farm histories, (Laberg 1938) and (Espe 1990), around 1744-45, Odd and Kirsti's son, Halvor Oddsen Kyrkjebø, came to Lærdal and married the widow of the owner of the Rå farm, Ingeborg Larsdtr. 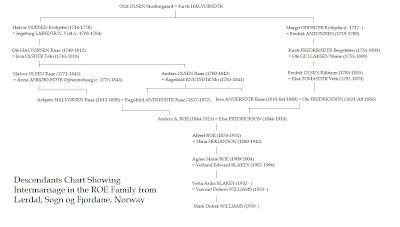 TRANSLATION: In 1744 a completely foreign husband comes to the farm. He is Hallvard Oddson Kyrkjebø. Both the father's and the farm name are strange enough we must believe that he came from outside. The father's name of Odd is foreign to Lærdal. Hallvard was married to the widow of Ola Nilsson Rå in 1744.

Hallvard and Ingeborg had three children: Ole, who got the farm; Marita, was unmarried; and Kirsti was married to Anders Olson, a cotter under Rikheim.

The Lærdal parish records provide the death dates for both Halvor and Ingeborg:

During their 1986 visit to Norway, Verla and Vince Williams met the current owner of the Rå farm, Ingebrigt Rå, who is Verla's 4th cousin. Some time after that he sent Verla a chart he had created showing their descent from Halvor Oddson (Raae) Kirkjabo in addition to Helene (Rowe) Furst's descent through Anders Oleson Raae's son, Lars. This chart is reproduced below.

TRANSLATION: Ola Hallvardson was born in 1749 and in 1770 married Jesa Olsdtr. She was born in 1745 and was the daughter of one Ola Andersson under Rå. It must have been not so little [framtak] Ola. Like I said, it was the churches at Tønjum and Hauge as eight had use of a good part of his farm. To [ ] himself of this, he bought the churches and thus the earth and the eight. [ ] this was possible is so much to stand in for Ola, for in 1805 he sold half of the two churches to Jens Ærie, and then got mostly the same for that part which he had given of it all.

Ola and his wife had seven children. Of these 6 reached adulthood: Hallvard and Anders were on the family farm, Ola went to Ljøsne, Lars died young, Ingeborg married Knut Kvigne, and Brita married to N. Voll.

Ola Hallvardson was the last to have sole use. In 1807 he passed down the farm to his two eldest sons, Hallvard and Anders. [ ] it here after to talk about using 1 and 1a.

The Lærdal parish records corroborate the marriage date of Ole and Jesa (Giæse) showing that they were married on 29 Oct 1770.

Ole Halvorsen Raae, his wife Jesa (Giese), and their family also appear in the Folketelling 1801 for 1422P Lærdal Prestegjeld, (the 1801 Census for Lærdal parish).

The Lærdal parish records also record the deaths and burials of Ole and Jesa.

This ROE Blog is based on genealogical research compiled by Verla A. Blakey WILLIAMS and edited with notes by
Mark D. WILLIAMS.

+ more at the collaborative, worldwide WikiTree.